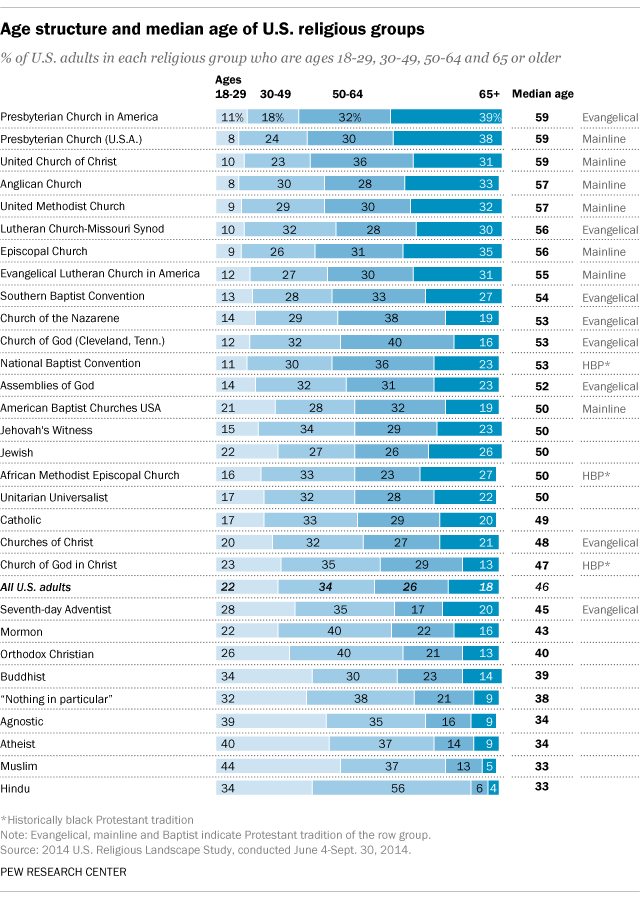 The graying membership presents a challenge and perhaps an opportunity.

The average age of a Seventh-day Adventist believer in the United States is around 50, noticeably older than a new estimate by the respected Pew Research Center and well above the worldwide average of 38, a church statistician said.

The graying membership presents a major challenge to the Adventist Church in the United States but also perhaps an opportunity, he and other church leaders said.

“I really wish it were true that we were one of the youngest denominations in the U.S.,” said David Trim, director of the Adventist Church’s Office of Archives, Statistics, and Research. “But the data we have just doesn’t suggest that’s the case.”

The Pew Research Center, a non-partisan organization in Washington, ranked the Adventist Church as one of the youngest U.S. denominations in a new report that says the median age of a U.S. Adventist is 45.

“Mormons, Orthodox Christians and Seventh-day Adventists … are relatively young compared with most other Christian groups,” Pew said in the July 11 report, its latest findings from a 2014 national religious survey.

Pew put the median age for all Christians in the United States at 49, while Presbyterians and members of the United Church of Christ fell in the oldest end of the age category at 59.

“We have a huge challenge in the U.S. to reach and retain young people,” Trim told the Adventist Review. “However, survey data from Pew and other credible opinion pollsters overwhelmingly show that young Americans are not becoming atheistic, they are rejecting organized churches and religions. So while we have a challenge in making young people interested, perhaps it’s not so much in Christ but rather in the Seventh-day Adventist Church.”

Asked for additional information, a Pew spokesman referred a reporter back to a brief mention of Adventists in the July 11 report, which was published on the organization’s website, and to a 2012 global religious survey that did not single out Adventists.

Trim reiterated previous skepticism about the Pew findings on U.S. Adventists, noting that it had a large margin of error of 9.2 percentage points.

“This means that the age in the U.S. could be well into the 50s, which is what other data are telling us,” he said.

A major 2008 study by Adventist researcher Monte Sahlin indicated that the median age of North American Adventists was 51, Trim said. A more recent 2013 church survey of North American members found that two-thirds of respondents were over the age of 50.

The church does not have comprehensive data on the age of Adventists worldwide, Trim said.

“However, drawing on different sources, including computerized actual membership records from some parts of the world, plus our own 2013 surveys of church members worldwide, which have a much lower margin of error than Pew’s in the U.S., our best estimate is that the mean age of a Seventh-day Adventist is 38 and the median age 32,” Trim said.

The median age of Christians worldwide is 30, according to a 2012 Pew survey. The world’s overall population, which reached an estimated 7.4 billion in March 2016, has a median age of 28, it said.

Adventist leaders should be sensitive to the church’s demographic makeup “because our ultimate goal and calling is for a multigenerational gathering at the Second Coming of our Lord,” said Tracy Wood, associate director of young adult ministries for the Adventist Church in North America.

Wood also said that the challenge of engaging young adults who don’t identify with any particular faith is not new.

“Actually it is a demographic that some in our church are anxious to engage with,” Wood said by e-mail. “This is one of the core areas for the relevance of young adult ministry — helping young people in their 20s and 30s process what they believe.”

Wood said the Adventist Church is more ready than many religious organizations to include young adults in its mission of sharing the gospel because of its education and health systems, volunteer opportunities, and public campus ministry networks, among other initiatives.

“In short, we are multifaceted and poised for inclusion wherever young adults want to be involved,” Wood said. “The challenge for us is that we as leaders expect them to stay with us. Rather we should expect them to go — as Jesus commanded — and to go with them!”

We reserve the right to approve and disapprove comments accordingly and will not be able to respond to inquiries regarding that. Please keep all comments respectful and courteous to authors and fellow readers.

This site uses Akismet to reduce spam. Learn how your comment data is processed.

Tonight, we’ll be be working through a song of encouragement. A song that is meant to let you know, that ”It ain’t over”. So, if you have gone throu…

Tonight, we’ll be be working through a song of encouragement. A song that is meant to let you know, that …
Read More

FF or many Adventists, sharing the gospel message is a challenge. First, there’s the barrier…

DD uring the campaign A voice of hope from August 15-22, Ester Brítez offered her…

TT uning in to a local radio station usually provides an update on the news,…