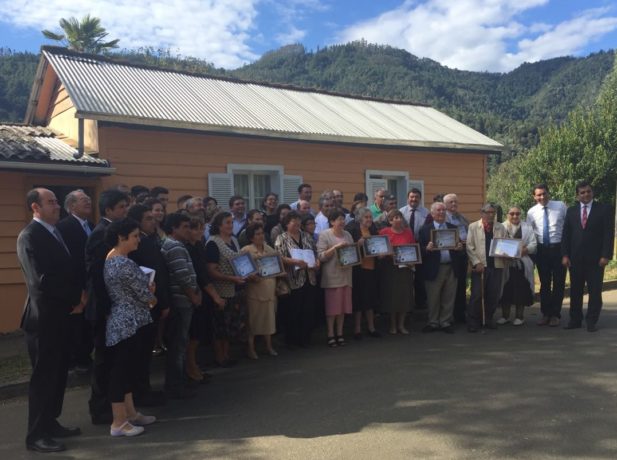 The nine new converts, originally members of another Christian church, were welcomed into the Seventh-day Adventist fellowship by profession of faith. Following Bible teachings and Jesus’ example, those who desire to join the Seventh-day Adventist Church usually become members after being baptized by immersion. Membership by “profession of faith,” however, is an option reserved for those who have already been baptized by immersion in a Christian church and have been following most of the Adventist beliefs.

In this case, by the time the new converts got in touch with the Adventist Church in mid-2016, they were already keeping the seventh-day Sabbath as described in the Bible, reported the South American Adventist News Agency. The local church then decided to offer them the Nuevo Tiempo course on Bible prophecy to complement their previous knowledge.

“The Bío-Bío regional church organization supported us by sending a Bible worker,” said local pastor Carlos Jaramillo Rupayán. “He helped to confirm the decisions made by those who have now become members of our church.”

“For this venture, there were joint efforts by Personal Ministries, Nuevo Tiempo, and local churches,” noted Parra. “And then, we were able to enjoy the personal testimony of everyone involved in this project.”

“Now we are applying the same model to other churches across the region.”

For Alberto Silva, director of Personal Ministries in Chile Central-South Conference, or church region, this is a confirmation of how the TV network in South America is supporting the evangelistic work of the church.

“This has shown us that, as a church department, we must keep offering the Nuevo Tiempo Bible course,” said Silva. “Now we are applying the same model to other churches across the region.”

The Contulmo new members are just another success story of the blooming Adventist media ministry in Chile and other South American countries. Recently, Nuevo Tiempo Chile reported that a process had been launched to switch to digital TV, which now is available on over-the-air television to over 5 million, or 80 percent, of the population of the capital city of Santiago. The plan is to extend this digital TV option to other Chilean cities soon. It is expected that six new transmitters will help to reach at least 80 percent of the 18-million living in this southern nation.

–With reports from the South American Adventist News Agency and the Nuevo Tiempo Chile TV Network.

We reserve the right to approve and disapprove comments accordingly and will not be able to respond to inquiries regarding that. Please keep all comments respectful and courteous to authors and fellow readers.

This site uses Akismet to reduce spam. Learn how your comment data is processed.

The “City of Light” has faced slow church growth in the recent years. The Seventh-day Adventist Church is now trying …
Read More

“Lift up the trumpet, and loud let it ring, Jesus is coming again!” As Seventh-day…

January 19, 2021 The goal is to build bridges with growing communities across the region,…

January 15, 2021 Ted N. C. Wilson thanks Adventists across the nation for being faithful…